This article assumes that you’ve correctly diagnosed ping as your issue, and that it’s not actually FPS drops. If your FPS is stuttering, it is not a ping or networking issue, but rather a CPU or GPU issue.

If you are having high or erratic ping, the most important step to resolving it is figuring out whether the problem is:

Figuring this out is easy with the ping command, which sends a packet somewhere and tells you how long it takes to come back. On Windows, it looks like this: 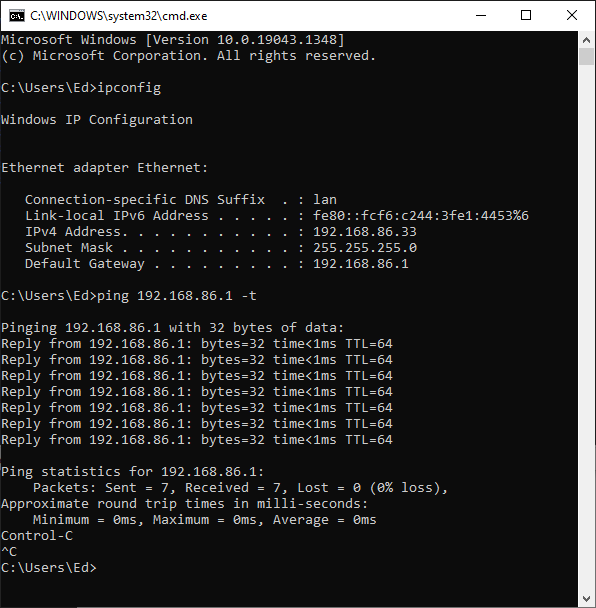 You access this prompt by selecting Command Prompt in the Start menu. Note the -t at the end of the ping command: that sends the ping command perpetually until you stop it by pressing CTRL-C.

Diagnosing your ping issue is a three step process:

First, ping your router’s IP address, which you can find in a variety of ways. The time should be consistently about 1ms, sometimes less, as in my above screenshot.

If the time is inconsistent or much greater than 1ms, then your network issue is between your computer and your router. Don’t bother calling your ISP - they won’t help. Instead, you should restart your router and/or computer. If that doesn’t work, other methods include changing the WiFi channel, switching to Ethernet, or moving your computer closer to the WiFi signal.

If that wasn’t the issue, then type in “ping www.google.com -t”. This should still be relatively consistent and under 20ms or so: 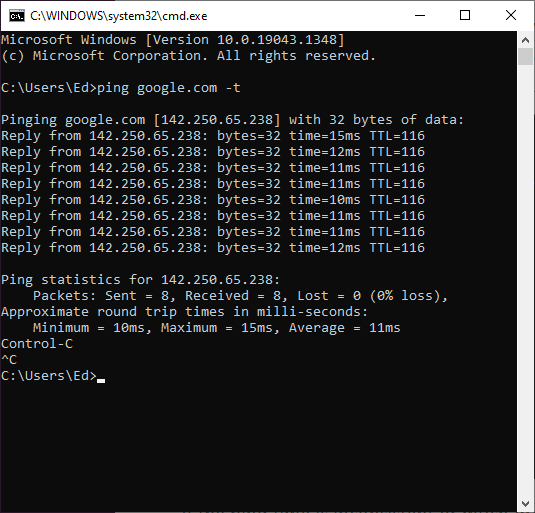 If the ping time is inconsistent or much greater than 20ms, then the issue is between your router and the internet. This might still be a problem with your router, and you should restart your router, but it may also be an issue with your ISP.

If that still wasn’t the issue, then it is probably an issue with your game. Check the game’s forum or status page to see if others are reporting the same issue.

Disc golf for beginners: flight paths How to get better at chess after you learn the rules